Other things of intetest

Two of the big questions many people have about being creative are; How do you do it?, and Is there a recipe?  I'm not sure anyone has fully answered either yet. Part of the difficulty in doing so is that it's one thing to study creativity and another to practice it.  Some of the most famous designers have maintained that you can't do both; that you can study or practice creativity, but not at the same time.

I recently posted about the similarities between Imagineering and Design Thinking after studying the lives of very creative people and looking for common themes between them. That turned out to be much more difficult than I expected, not only because of the sheer volume of reading material, but also because Walt and the Imagineers and Arrow's Development's founder's didn't really talk much about their methods. Even when they did, their vocabularies were quite different. Disney spoke in the context of telling stories and making movies while Karl Bacon and Ed Morgan were speaking as engineers and ride designers and others like William Lear and Tomas Edison were speaking in the context of their specialties.

Today we're going to look at a creative method that hasn't gotten much press. I'm talking about the idea of the Three Walts or Walt's Three Rooms. 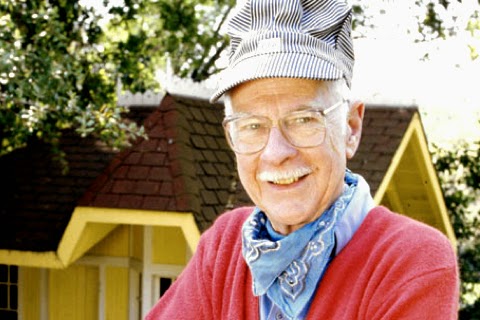 Oliver Johnston was born on Oct. 31, 1912, in Palo Alto, Ca. where his father was a professor at Stanford. "Ollie"was one of Disney's "Nine Old Men".  Many feel that the two most accomplished of the group were Ollie and his close friend Frank Thomas. The pair met at Stanford in the 1930s and after graduation were hired by Disney for $17 a week when the studio was expanding to produce full-length feature films.

Ollie once noted that he and Frank "were bound to be thrown together" at Stanford, since they were two of only six students in the art department at the time. When not in class, they painted landscapes and sold them at a local speakeasy for meal money.

Ollie also commented about Walt that there were actually three of him and that you never knew which one was coming to your meeting;
Not only were there three Walts, when ideas were being developed there were three different rooms which were used to investigate, discuss and refine them.
Room 3 was called the Sweatbox and it was there that the entire project was presented, not only to the team, but to the Devil’s Advocates, the most famous one being Walt.  In these "Critic"meetings no one was personally attacked, but it was where things either became a reality or were put on hold for later, sometimes much later!

Here are some detailed descriptions of what happened in each phase and room:

DREAMER - Dreamers spin innumerable fantasies, wishes, outrageous hunches and bold and absurd ideas, without limits or judgment. Nothing is censored. Nothing is too absurd or silly. All things are possible for the dreamer. Dreamers ask: If I could wave a magic wand  and do anything I want – what would I create? (Pixie Dust - df) How would it look? What could I do with it? How would it make you feel? What is the most absurd idea I can conceive? The Dream-storming in Room 1 was the space for asking "What if?" and "Why not?"

CRITIC - The critic reviews all the ideas and tries to find flaws in them by playing the devil’s advocate. Critics, ask: How do I really feel about it? Is this the best we can do? How can we make it better? Does this make sense? How does it look to a customer? A client? An expert? A guest? Is it worth our time to work on this idea? This was also where Walt was when he suggested "plussing"things up.

For example; Suppose someone wanted a better way to water their garden.  The dreamer might suggest  teaching the plants how to talk, so they can tell you when they are dry. The realist develops this into an animated bird that monitors the moisture content of the soil. The realist refines the idea by exploring various sensors, hardware and software. Finally, the critic evaluates the idea for all possible flaws and problems.

Organizing these into process steps you get;

Dream big. Any idea, no matter how absurd, can and should be suggested. Defining the big, bold objectives that will shape your project.

The Room Setup: Open, airy rooms with lots of light and high-ceilings are the best for thinking big. The team should sit in a circle facing each other,  focused on the idea, to promote collaboration and creative flow.

Mindset: Any idea is fair game. This step is not about feasibility, it’s about surprise. Set aside your assumptions and push yourself to think in new ways.

Here the focus is on creative execution. How will the idea be implemented? Who’s doing which tasks? What’s the timeline? In Disney’s case, this phase would involve sketching out characters, discussing plot, (storytelling - df) and populating storyboards.

Room Setup: A practical room with a large dry-erase board or wall which facilitates strategic planning. The team should sit in a semi-circle facing the board as everyone participates in the planning process.

Mindset: This is where you roll up your sleeves and fill in the blanks. You may find a gem of an idea from the first step that needs to be fleshed out. During this phase, seek to resolve every uncertainty around timing, logistics, and feasibility. When something doesn’t make sense, question it.

Goals: Seek to resolve every uncertainty around timing, logistics, and feasibility.

Ask “Is this the right approach?” In this final phase, the critic enters the fray, asking the hard questions. Is the plan really doable? Are there unwieldy aspects that need to be cut? Are you meeting the overall project objective? The process shifts from dream-storming, to subsequently practical. The environments in the various “rooms” prompt us to adopt the best mindset at the right time, ultimately giving great ideas the thoughtful consideration they require to ultimately be implemented.

Room Setup: Analytical thinking is best done in smaller, more constrained spaces. (The Disney crew used a small room under the stairs.) The team sits in a single row facing the project plan, which promotes criticism of the project, but not individual people.

Mindset: Pose the difficult questions and share the earth-shattering doubts.  In considering How, you’re likely to get lost in the weeds. The Why? step provides the perspective from the balcony as opposed to the dance floor. In this phase, consider the plan in the context of your business and your long-term mission.

Where traditional brainstorming approaches would probably have us patting ourselves on the back and adjourning the meeting, Imagineering, and Design Thinking, go deep: they are methodical, disciplined, and time-intensive up front.

Here are some possible Disney Mascots or Characters for Walt's three rooms:

The Realist - Ludwig Von Drake is the analyst.
The Dreamer - Mickey has the vision, heart and empathy.
The Critic - Donald Duck has the eye for what's missing or just plain wrong.

Posted by Thinking of Design at 10:20 PM